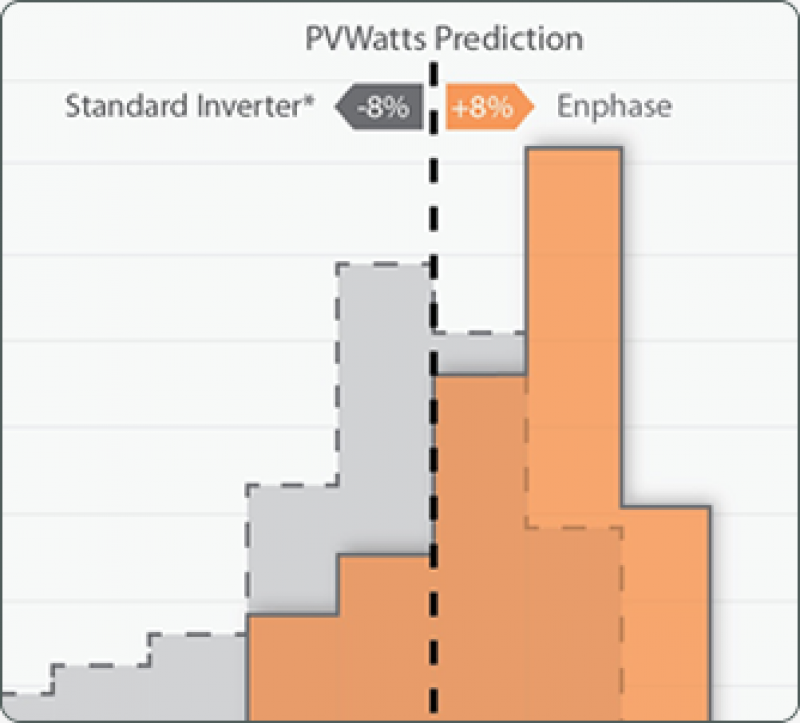 Everyone knows that solar can help the planet, and many know it can also help their pocketbook, but in either case, the real question is: “how much?”

The amount of energy a solar array produces is at the heart of answering this question.

Solar integrators estimate the energy production of a solar array using modeling tools that predict performance based on a variety of factors, such as historical weather, system design and other technical parameters. The most common tool is the PVWatts calculator provided by the National Renewable Energy Laboratory (NREL).

Though tools like PVWatts have led the way in simplifying performance forecasting, the subject remains complicated. At Enphase, we’re also driving to better understand performance. We recently took a deeper look at the issue with some of our partners, Astrum Solar, Real Goods Solar and Solar Universe.

When our research began we discovered a number of published studies showing that common performance estimation tools overestimate solar system performance. The most extensive study we found showed that the actual performance of 480 solar installations was on average 8 percent below the PVWatts estimate.

This can be a big problem, considering that energy production estimates aren’t just for the ‘eco’-benefits of solar, they're also essential for the ‘eco’-nomics of a solar investment.

For example, PVWatts is at the heart of many solar sales proposal generators, and it is also the tool used to define the Expected Performance Based Buydown (EPBB) incentive provided by the California Solar Initiative.

Surprised by our initial findings, we became curious how Enphase systems compared to PVWatts.

Using a similar methodology to the study of 480 sites, we examined data from 143 Enphase systems, installed by our three partners in California and the Eastern U.S. The study revealed that Enphase installations on average outperform PVWatts estimates by 8 percent. Download the study here.

When considering our findings relative to prior studies, they indicate that Enphase Microinverters offer a 16 percent performance advantage over standard inverters, relative to the PVWatts estimate.

After completing the study, we spoke with Michelle Waldgeir, vice president of marketing for Astrum Solar, a contributor to the study.

Michelle explained that Astrum Solar has been successful selling Enphase based on design flexibility, monitoring and warranty, but that energy harvest had been a trickier factor to incorporate into sales presentations.

“Conceptually, customers understand that a standard inverters can leave them vulnerable to things like, ‘The Christmas Light Effect,’—when a string of modules underperforms due to one bad module—but it’s difficult to provide them with concrete information about the long-term financial impact of this problem,” she said.

“Previously, we relied on references and individual case studies to make the Enphase technology case. We often pointed customers to a test site where we had added an Enphase array to a rooftop that already had a string inverter array on it installed by another company. In this side-by-side setup, the Enphase array outperformed the standard inverter system by more than 20 percent,” Michelle continued. “We’re excited that the new study demonstrates performance gains across a broad sample of rooftops and locations. We can now confidently provide customers with real-world data that estimates the performance benefits Enphase microinverters can deliver.”

At Enphase, we wanted to enable installers to see the Enphase advantage more easily. So, we recently introduced an Enlighten PVWatts integration, and now any installer can input a system’s design information and produce estimations right within Enlighten.

This type of integration doesn’t just demonstrate the power of our microinverters, but it also shows the value of web-based monitoring and analysis software. Through Enlighten monitoring, system owners see exactly “how much” their solar system is helping the real world.

For Enphase enthusiasts, the arrival of Ensemble™ technology has been long-awaited, and can now be preordered!  Ensemble is Enphase’s latest software technology which makes a solar+storage system...
Learn more