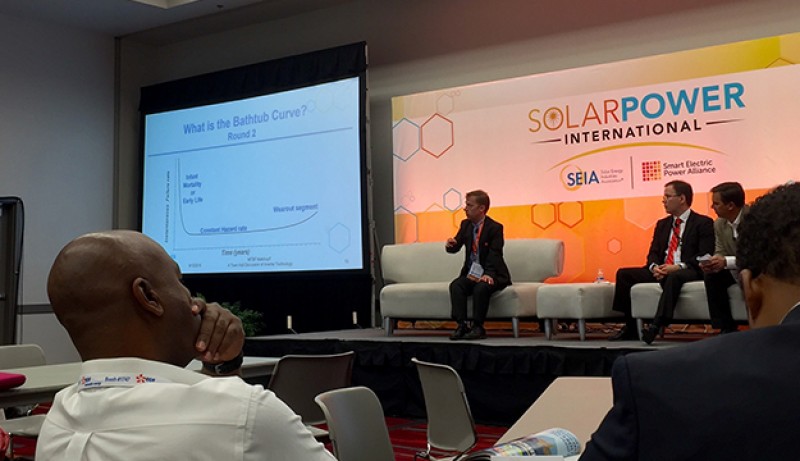 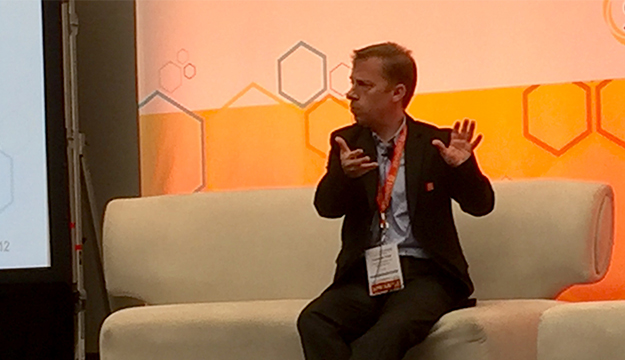 Ciaran and the other panelists explained what MTBF means and why it’s important, and took turns defining reliability. The Enphase VP noted that reliability is built around the failure metric, factoring in such components as temperature and stress on the inverter, but that the elements in play leading up to the MTBF calculation were as important as the MTBF number itself. Comparing rigorous test results with actual field conditions is critical in reaching the goal of parts-per-million failure rates that inverter manufacturers like Enphase are striving for, he said.

The MTBF panel also talked about the “bathtub curve,” an analysis of hypothetical failure rates over time. The trick for an inverter is to stay flat at the bottom of that curve for as long as possible, through the duration of the warranty. With strong testing and reliability protocols running through design, development, production, and into the field, Fox said you can make sure that “the bathtub is more comfortable to lay in.”

The current state and future wave of intelligent buildings technologies was the topic of a panel joined by Ilén Zazueta-Hall, Enphase’s director of software product management. Pointing out how there are an increasing number of connected devices, which can in turn enable new services, she opined that only two applications have gained traction (other than entertainment) in the smart residential market: energy and home security.

As for energy intelligence, she said that what’s important is not only the generation, storage and consumption hardware and software “nodes” themselves but also how well they communicate and integrate with each other. Acquiring knowledge about home energy requires measurement, and when that knowledge is applied, you have control. And measurement plus control equals energy management and independence, Zazueta-Hall added.

With 33 years in the solar PV business and counting, Enphase’s John Berdner may be one of Enphase’s most prominent industry experts. He participated on the panel titled “How smart are your inverters?”—a topic that he knows as well as anyone, given his leadership roles on California’s Rule 21 Smart Inverter Working Group and various standards committees.

Berdner explained that “advanced grid functionality” goes to the requirement for any smart inverter to be grid-supportive and utility interactive. He later stated that the current smart inverters are “smart enough for now,” making a comparison between the first generations of smart phones and smart inverters. Much as our smart phones have advanced by leaps and bounds since those early models, Berdner said, the next step for smart inverters is to optimize behavior along any given feeder and across the utility distribution network, at a low cost and with maximum performance and stability.

While each of the Enphase trio’s panel performances varied in style and delivery, they each shared a special something: mastery of their subject matter and a passion for excellence.

Enphase is exhibiting at SPI in Booth #1111. For more information about our activities at SPI, click here. Follow @Enphase during #SPICon on Twitter for the latest from the booth, the show floor and the conference.