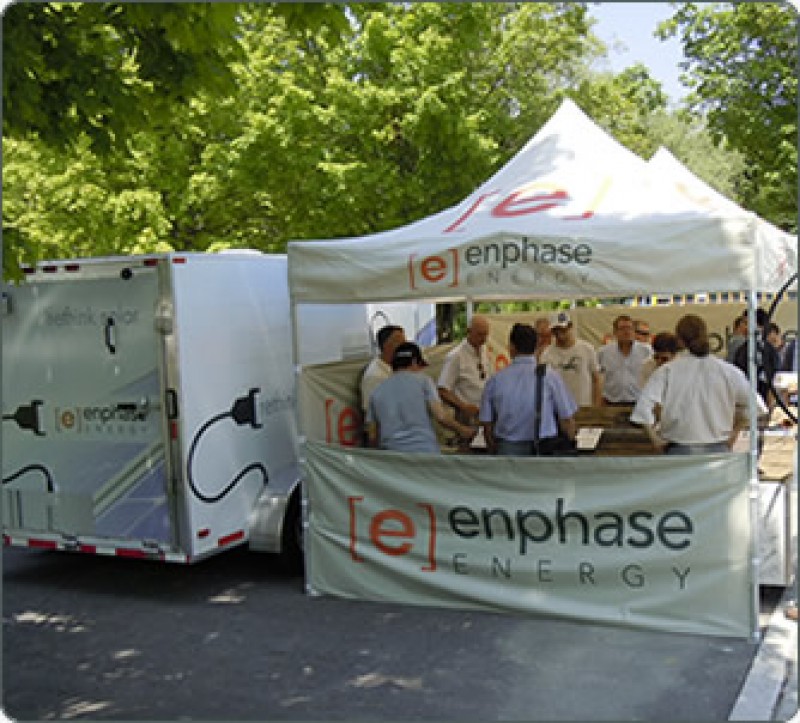 After touring across North America for two months in an Enphase-branded truck and trailer, the Enphase Sneak Preview Roadshow has returned home to northern California. For those who missed it, the Enphase roadshow team set up shop in 25 cities across the U.S. and Canada to showcase the new M215 Microinverter System, along with free food, giveaways and contests. Visitors had the opportunity to get hands-on experience with the latest Enphase microinverter and it's new cabling system the Engage Cable.

The Enphase roadshow team was met with enthusiasm from our customers at each event, and we were flooded with requests from our installers to visit their cities in areas we were unable to include in this tour. All along the way, we heard great feedback from installers -- some long-standing, some just learning about microinverters for the first time.

Those of us on the road enjoyed collecting the hundreds of signatures on the demo roof and seeing how amazingly fast some of you are at terminating the new cable during the Terminator Cap Contest. Back at the office, the rest of the Enphase team loved watching the comments and excitement on our Facebook page as the tour moved across the continent. A real highlight was when the team at Brightstar Solar reviewed our Boston stop on their blog.

[caption id="attachment_505" align="aligncenter" width="475" caption="A group of onlookers in Kingtston, ON, Canada, watch a contestant race the clock in the Terminator Cap Contest."]

And now the moment all you roadshow visitors have been waiting for... The winner of the iPad 2 from a random drawing is Jordan Belknap of SunBug Solar in Boston, MA. Congratulations, Jordan!

Thanks to all of you who made the Roadshow such a success. Check out the photos from our trip on Facebook, and keep an eye out for announcements of future roadshow tours from Enphase in an area near you.