Taking a stand for our future

Few will argue that the time to initiate serious climate action is now.

On the one hand, the environmental consequences of carbon-intensive energy production are becoming ever more apparent and ominous. On the other, the renewable energy technology that will usher in the new energy future is becoming more viable by the day.

As reported by The New Yorker in April, “solar energy will be cheaper than fossil fuels almost everywhere on the planet by the decade’s end.”

It’s a bold prediction and one at the heart of the Enphase mission to accelerate the shift to a more sustainable and equitable clean energy future, one that harnesses the abundant power of our sun.

With the doors finally reopening for renewable energy events in Australia, Team Enphase was proud to support one of the premier solar, storage, and smart energy forums held in the country annually.

Our purpose for attending was clear: contribute broadly to help strengthen the clean energy sector down under, support solar professionals focused on delivering exceptional consumer experiences, and showcase that the future of solar technology in Australia is available today. 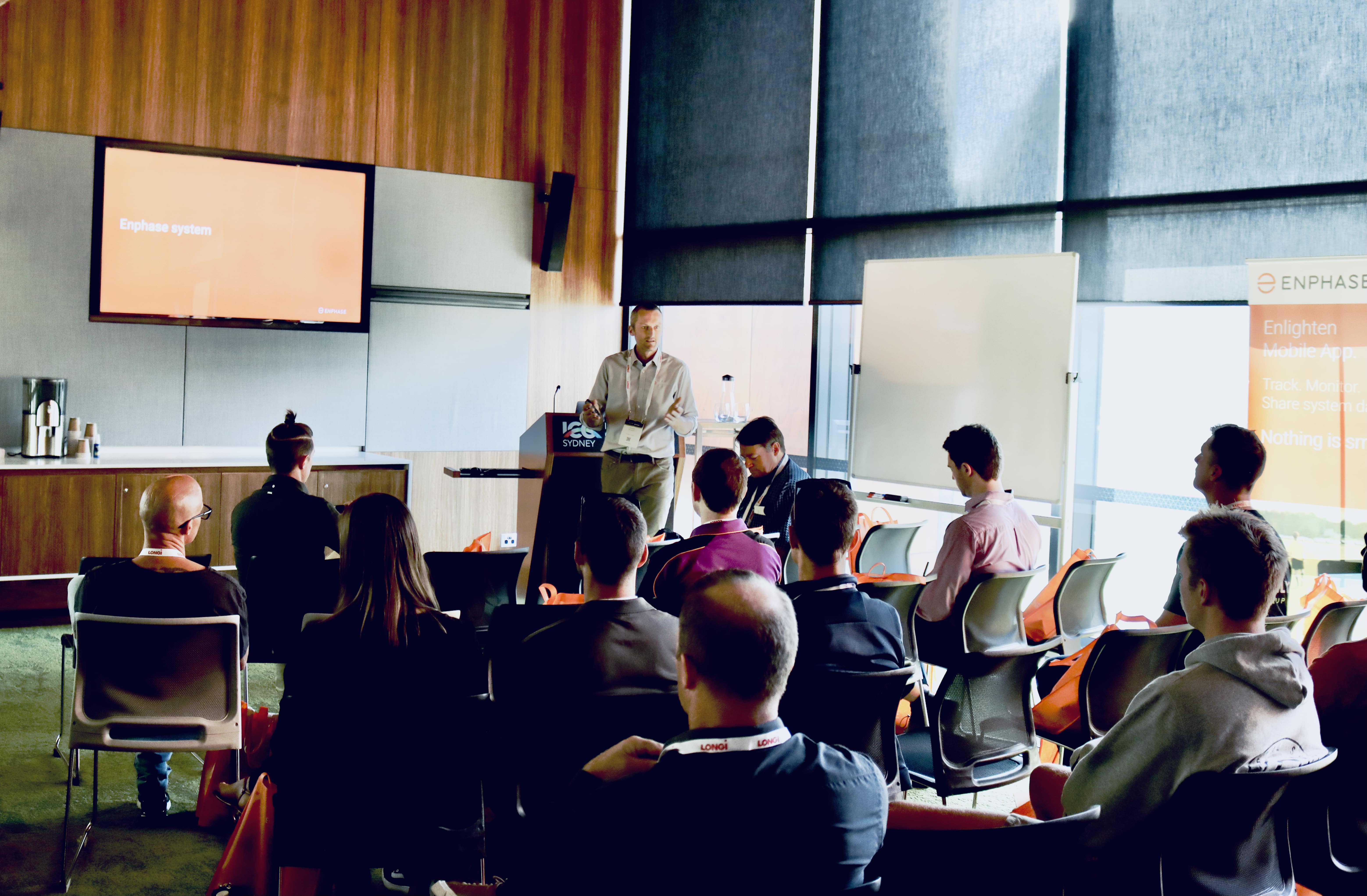 Making a statement about quality

At the event, Enphase intentionally set out to make a statement – when homeowners think about their energy needs, we want them to think about Enphase. We want to be their trusted energy partner. 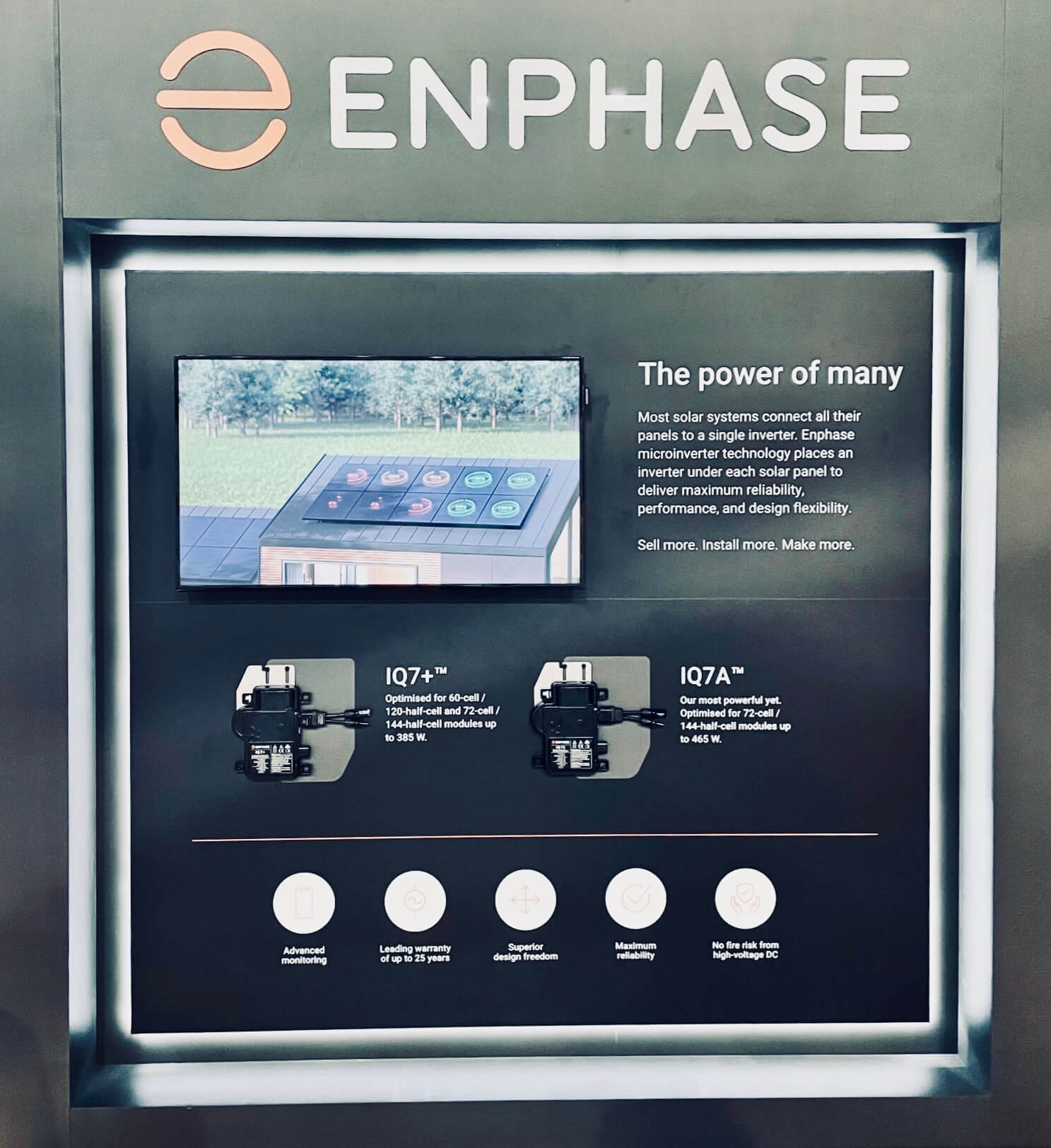 Enphase microinverters may be small, but they’re a big deal.

Our goal is to provide a seamless experience for homeowners, which requires both great products and exceptional delivery partners like the solar professionals in our Enphase Installer Network (EIN). Homeowners looking for reputable solar retailer can find an EIN installer in their area here. 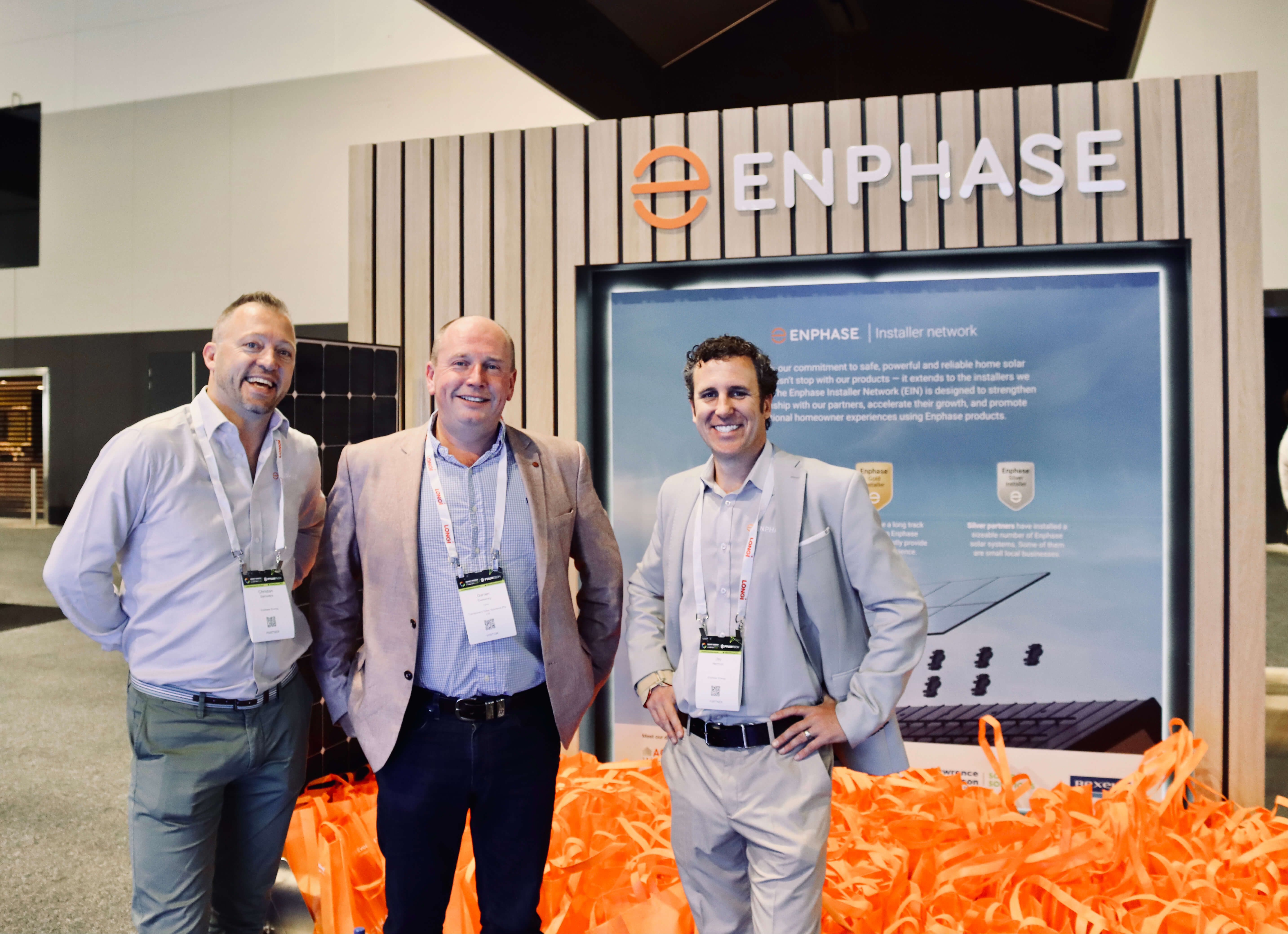 Across the two days of the event, Team Enphase also presented in multiple conference streams on topics ranging from how solar should be connected to the grid, building an installer community committed to quality and service excellence, and on quality solar technology. 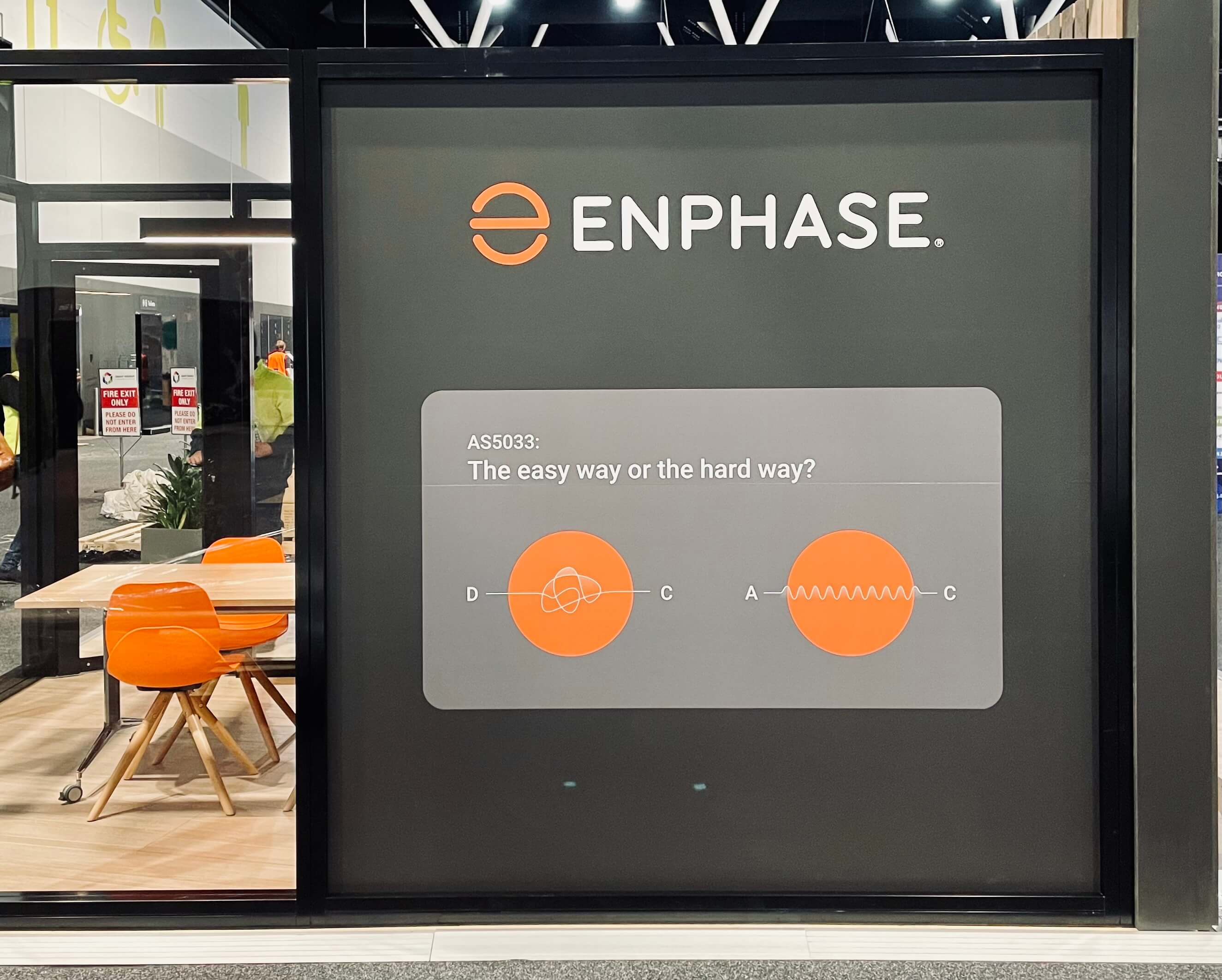 Enphase makes it easy to comply with all the new solar installation standards.

We were also privileged to share the stage with several key partners, such as Jake Warner, director at Penrith Solar Centre. He spoke about the importance of quality technology in running a sustainable solar installation business. A EIN Platinum partner, Penrith Solar only sells Enphase microinverters to ensure its customers get the most out of their solar investment. 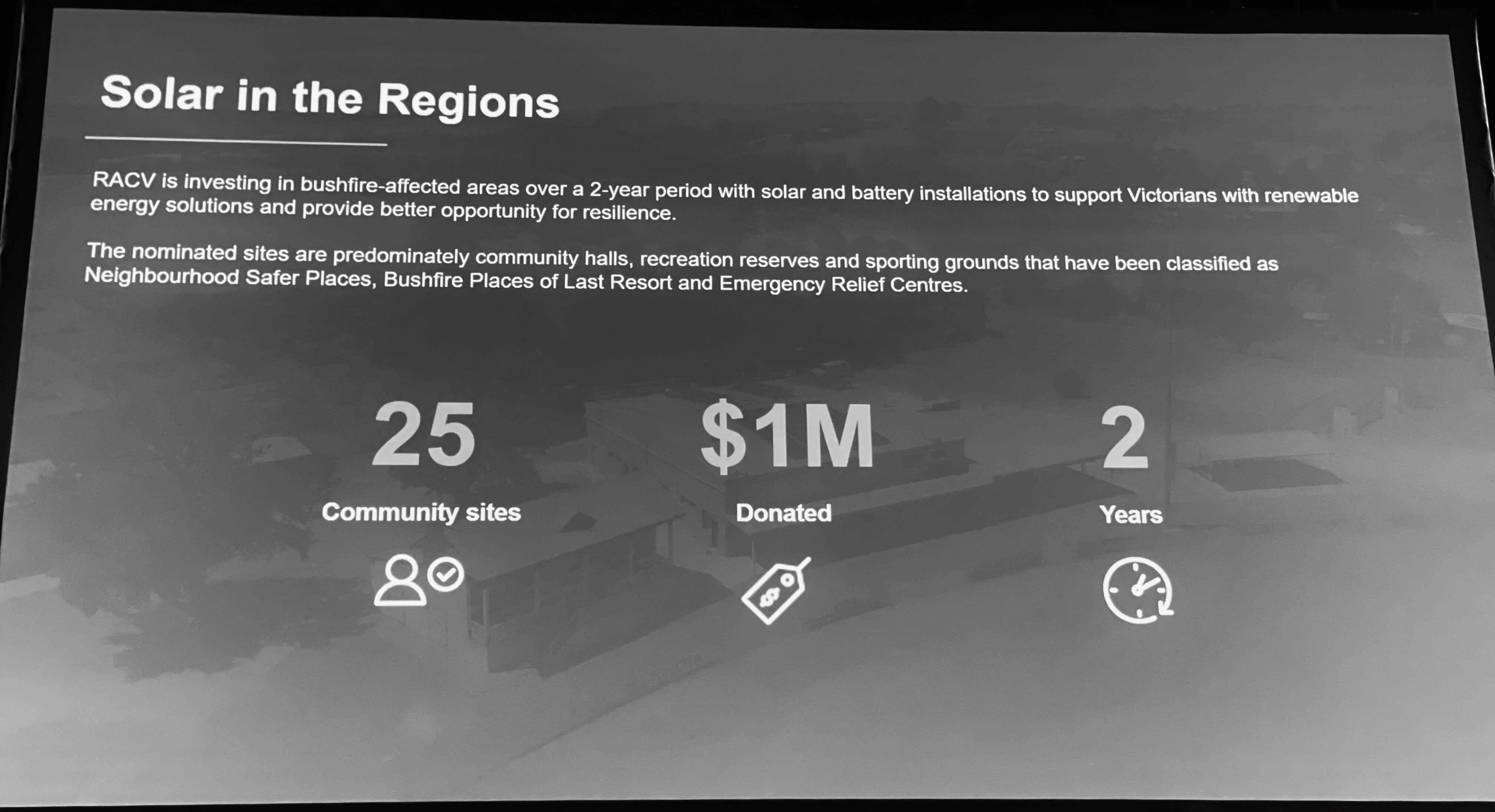 Another EIN partner, RACV Solar, shared highlights from the incredible contributions it is making to support bushfire-affected rural communities in Victoria with renewable energy solutions. Enphase is delighted to support this initiative in 2021.

A big thank you

From the countless conversations at our booth to the near hundred installers who attended our technical training sessions. To our distribution partners and the EIN installers who joined us for a sensational after-party to celebrate our collaboration – a massive thank you. We couldn’t change the game down under and help change the world without your support.

We are thrilled to announce that we recently shipped our 20 millionth microinverter, representing an installed base of over 4 GW.

A common question asked of Enphase installers is, “Why are you installing a 260 watt solar module on a 215 watt microinverter?” But, there is no "common answer" to this question. Though the practice of “over-sizing” solar modules relative to the inverter has existed for decades, it remains one of...
Learn more

Taking a stand for our future ...
Read

A common question asked of Enphase installers is, “Why are you installing a 260 watt solar module...
Read 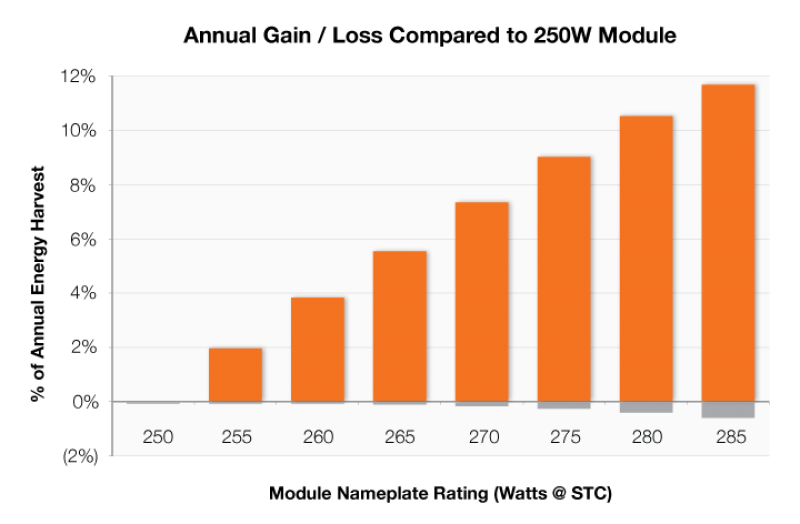 A common question asked of Enphase installers is, “Why are you installing a 260 watt solar module on a 215 watt microinverter?” But, there is no "common answer" to this question.

Though the practice of “over-sizing” solar modules relative to the inverter has existed for decades, it remains one of the trickiest topics to explain. And, even among solar professionals, conversations about over-sizing become more like religious debates than scientific discussions (trust me, I’ve been there).

The reason for all the confusion: there is no right answer.

No matter what sizing ratio you recommend, there are costs and benefits. And, the “right” choice depends on where you see the most value.

For example, sizing the inverter to equal the module’s nameplate rating ensures there will almost never be any energy lost to inverter saturation (aka “clipping”). At the same time, using a large inverter increases the overall cost of the system.

Conversely, selecting a smaller inverter lowers the system cost, but it also limits the output of the modules at select times, when conditions are optimal (mostly in the early spring).

In both cases, we are balancing cost with performance.

Enphase recently weighed-in on this balancing act with a new study: Bigger is Better: Sizing Solar Modules for Microinverters.

In our study, we examined the cost/benefit trade-offs and came to the conclusion that there are two reasons to recommend over-sizing: one based on the fundamentals of solar product ratings and the other based on the economics of today’s solar industry.

Fundamentals: The Tale of Two Tests

The first reason to over-size is simply that you are anticipating how the solar module will actually perform in the field.

The power ratings of modules are based on a very brief indoor “flash test” with ideal sunlight and temperature conditions. Yet, in the field, module output actually declines as the module heats up from the sun.

As a result, the module’s peak output in the field is typically 10-15 percent lower than its rating. Further, these peaks continue to decline over time, as the module degrades and collects dust.

Conversely, the nameplate rating of an inverter (aka the “max output power”) is based on a series of tests performed at high temperatures and across a range of electrical conditions to reflect the worst-case scenarios the inverter will face. And throughout all of these test, the inverter must consistently meet or exceed it's nameplate rating.

In this sense, the inverter's nameplate rating is a minimum hurdle which the inverter must be able to consistently and continuously clear when operating in the field.

For this reason, most inverter products are capable of producing 4-5% more power than their rating. In addition, inverter performance does not degrade over time, unlike module performance.

Thus, the nameplate ratings of modules and inverters represent completely different things, even though they are both stated in Watts.

Sizing your inverter to match the module would mean you are paying for inverter capacity that rarely, if ever, gets used.

Which brings up the second factor: the economics of today’s industry.

One of the unique--and often overlooked--advantages of using microinverters is the impact they have on the electrical design of the solar system.

With microinverters, all wiring and electrical equipment is sized based on the output rating of the microinverter (i.e the AC capacity), rather than the module.

In contrast, most of the electrical design in a central inverter system is based on the size of the array (i.e. the DC capacity). Consequently, increasing the array size also require increasing conductor sizes, fuse counts and more.

When you break the link between DC capacity and electrical design, this means that module size has no influences on the conductors, circuit breakers and other downstream electrical equipment.

This also means that over-sizing with microinverters directly reduces the electrical balance of system cost on a $/W basis.

With this in mind, we evaluated the cost-effectiveness of different over-sizing ratios, and found a clear trend: bigger is better.

This finding is especially significant within today’s industry environment, where solar module prices are declining more rapidly than any other component cost.

As the decline continues, the economically optimal sizing ratio actually increases, due to its tendency to improve returns.

In other words, the goal of a good system design should be to regularly saturate the inverter, and not just in year one, but also in years 10 to 15, once degradation and soiling have taken effect on the module.

If the economics are encouraging us toward more over-sizing, clearly we need to consider reinventing the term itself. “Over-sizing” and “inverter clipping” imply that you’ve made a mistake in designing the system. This terminology is an outdated vestige of an industry focused solely on module cost and module performance.

It’s time we empower solar professionals with terms to support smart choices, based on sound economics. Welcome to the era of “right-sizing” and “inverter saturation.”

Taking a stand for our future Few will argue that the time to initiate serious climate action is now. On the one hand, the environmental consequences of carbon-intensive energy production are becoming ever more apparent and ominous. On the other, the renewable energy technology that will usher in...

We are thrilled to announce that we recently shipped our 20 millionth microinverter, representing an installed base of over 4 GW.
Learn more